A high-level resignation, a poet sensation, and a ballpark illumination 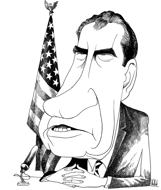 On this day in 1974, President Richard M. Nixon resigned in the wake of the Watergate burglary scandal. He was the first president in American history to resign. On this day in 1918, 22-year-old poet John Keats returned from a strenuous walking tour of the Lake Districts and Scotland with friends. On this day in 1988, the Chicago Cubs hosted the first night game in the history of Wrigley Field.

Let’s shine a light on your vocabulary today, see if your skills are unimpeachable, and determine if beauty and truth are indeed all you need to know.

(a) a formal denial of personal fault or error

(b) counsel or warning against fault or oversight

(c) calculated to confuse, entrap, or entangle in argument

(d) a formal acknowledgment of personal fault or error

(a) to surfeit with an excess usually of something originally pleasing

(c) to rise from a lower level or degree

(d) to take or seize eagerly

(a) baseball games on successive nights

(b) the rare feat of hitting two homeruns in one inning

(c) of, relating to, or being a baseball doubleheader in which the first game is played in the late afternoon and the second continues into the evening

(b) to come from a farm team

(b) the second game of a baseball doubleheader

(a) an early keyboard instrument

(b) a small hand drum or tambourine

(d) a musical composition for eight instruments or voices

What men or gods are you?