A Science Shocker, a Gold Stalker, and a Folk Rocker 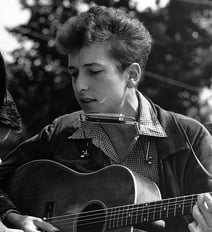 On this day in 1978, the world’s first test tube baby was born. In 1897, Jack London left for the Klondike to join the gold rush, where he would write his first successful stories, among them The Call of the Wild. In 1965, singer-songwriter Bob Dylan rocked the world of folk music when he performed at the Newport Folk Festival in Rhode Island and abandoned his acoustic guitar for an electric one. By going electric, Dylan eventually moved rock and folk music closer together. He also infused rock and roll, known then for its mostly lightweight lyrics, with a more intellectual, poetic sensibility.

Take our vocab quiz and … see if it’s you, babe.

(c) a member of the Eskimo people of northern Alaska

(b) a bass stringed instrument resembling a guitar

(c) one who makes stringed musical instruments (as violins or guitars)

(b) a Hawaiian guitar

(c) to form an idea or conception of

(b) a high overshoe worn especially in snow and slush

(a) of or relating to an actor

(b) of or relating to a miner

(c) of or relating to a balladeer

(d) of or relating to an author

This song’s for you:

By sharing our blog on Facebook or elsewhere with your friends, you will show yourself to be erudite, intelligent, and sophisticated. Your friends will adore you. You will have marriage proposals in the dozens. And you will win next week’s Megabucks lottery. So do it now!