A Whale, the Moon, and a Pig Stand 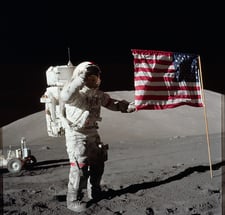 On November 14, 2006, state officials closed the last two of Texas’ famed Pig Stand restaurants, the only remaining pieces of the nation’s first drive-in restaurant empire. The restaurants’ owners were bankrupt, and they owed the Texas comptroller more than $200,000 in unpaid sales taxes. (Can you figure which word on our test today originated with Pig Stand restaurants?) Also on this day, in 1969, Apollo 12, the second manned mission to the surface of the moon, launched from Cape Canaveral, Florida, with astronauts Charles Conrad, Richard Gordon, and Alan Bean aboard. On this day in 1851, Harper & Brothers in New York published the novel Moby-Dick, by Herman Melville. The book flopped at first, and it was many years before the book came to be recognized as an American classic.

Test your knowledge with this week's quiz.