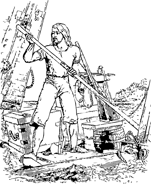 Several momentous items to mention for today’s date: Daniel Defoe’s fictional work The Life and Strange Adventures of Robinson Crusoe was published in 1719. The book, about a shipwrecked sailor who spends 28 years on a deserted island, is based on the experiences of shipwreck victims and of Alexander Selkirk, a Scottish sailor who spent four years on a small island off the coast of South America in the early 1700s. Ground was broken for the Suez Canal in 1859. And the beautiful Ginger Rogers died in 1995. Dance your way to fame and fortune, avoid disaster, and dig our vocabulary test today!

(c) a coral island consisting of a reef surrounding a lagoon

(b) sufficient distance for maneuvering a ship

(b) (British) a little island

(d) something a castaway doesn’t regularly get to do

6. The Suez Canal connects the

(a) Mediterranean Sea and the Red Sea

(b) Mediterranean Sea and the Black Sea

(a) a variation of the samba

(b) a noisy festivity

(a) a maritime protege

(b) a professional dancer

(c) slang for a canal digger

(a) the French-controlled southern entrance to the Suez Canal

(b) floating wreckage of a ship or its cargo

(d) a dance or figure for two performers