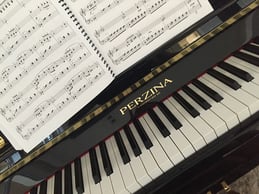 On May 15, 1982, “Ebony and Ivory,” sung by Paul McCartney and Stevie Wonder, began its seven-week run at #1 on the pop charts. Without the black keys, the white keys on a piano would pretty much be stuck playing “Twinkle, Twinkle, Little Star” and “Do Re Mi.” Thank goodness for the ebony keys. On this day in 1942, gasoline rationing began in 17 Eastern states as an attempt to help the American war effort. Rationing eventually spread throughout the country. In 1941, the Allies successfully tested the jet-propelled Gloster-Whittle E 28/39 aircraft. It was the first Allied aircraft using jet propulsion.  In 1756, the Seven Years War, a global conflict known in America as the French and Indian War, began when England declared war on France.