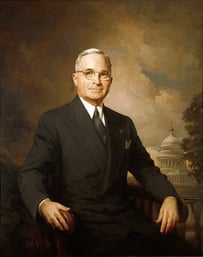 On May 8, 1945, both Great Britain and the United States celebrated Victory in Europe Day. In 1884, Harry S. Truman was born in Lamar, Missouri. Sometime after becoming a haberdasher, he became president of the United States. In 1963, with the release of Dr. No, moviegoers got their first look at the super-spy James Bond, played by Sean Connery. (All other actors fall short of the role. Everyone knows that.) And in 1988, in Seattle, Washington, Stella Nickell was convicted on two counts of murder after she put cyanide in Excedrin capsules in an effort to kill her husband. She killed him and a complete stranger. (This was roughly 12 years after the first “Tylenol murders” in Chicago.) Let’s see if you can spy a victory today in our quiz and thereby rise to heights unheard of. We’ll leave it at that.