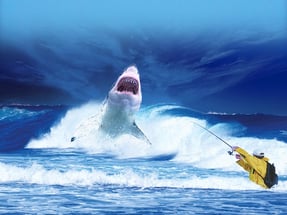 On June 20, 1975, just in time for the big summer vacation season, Jaws, a film directed by Steven Spielberg that made countless viewers afraid to go into the water, opened in theaters. The story of a great white shark that terrorizes a New England resort town became an instant blockbuster and the highest-grossing film in movie history until it was bested by 1977’s Star Wars. Jaws was nominated for an Academy Award in the Best Picture category and took home three Oscars, for Best Film Editing, Best Original Score and Best Sound. The film, a breakthrough for director Spielberg, then 27 years old, spawned three sequels.

Let’s see how brave you are today.

(a) having an appetite for human flesh

(b) derived from the oil of a shark liver

(c) composed of, relating to, or resembling cartilage

(d) none of the above

(a) a limb (as an arm, wing, fin, or leg) that is situated anteriorly

(d) any of various usually small bottom-dwelling sharks that often appear in schools near shore, prey chiefly on fish and invertebrates, and are a valuable food source

(a) suspicion or fear especially of future evil

(d) the beach of a seaside resort

(a) the hide of a shark or leather made from it

(b) the often unwarranted exciting of fears or warning of danger

(b) a continuing source of irritation

(c) a source of fear, perplexity, or harassment

(a) made as a final effort especially to avert disaster

(b) an imaginary object of fear

10. an even better movie directed by Spielberg

(c) Valerian and the City of a Thousand Planets, starring Cara Delevingne

Where are you on the Jaws scale?