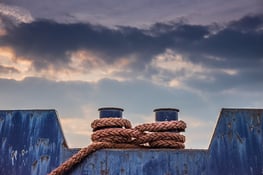 On this day in 1844, the U.S. Naval Academy opened in Annapolis, Maryland, with 50 midshipmen students and seven professors. Known as the Naval School until 1850, the curriculum included mathematics and navigation, gunnery and steam, chemistry, English, natural philosophy, and French. The Naval School officially became the U.S. Naval Academy in 1850, and a new curriculum went into effect, requiring midshipmen to study at the academy for four years and to train aboard ships each summer–the basic format that remains at the academy to this day. On this day in 1973, Vice President Spiro Agnew resigned. And in 1780, a great hurricane ravaged the West Indies. (Storms had no names back then.)

See how sharp and disciplined you are with today’s vocab quiz. Will you be accepted or will you resign immediately and be blown away?

The smarter people are known to share our vocabulary quiz with their friends and associates. That would be you, would it not?