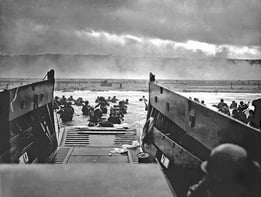 Although the term D-Day is used routinely as military lingo for the day an operation or event will take place, for many it is also synonymous with June 6, 1944, the day the Allied powers crossed the English Channel and landed on the beaches of Normandy, France, beginning the liberation of Western Europe from Nazi control during World War II. Within three months, the northern part of France would be freed and the invasion force would be preparing to enter Germany, where they would meet up with Soviet forces moving in from the east. Test your knowledge of certain military and combat terms and quotes in today’s word quiz.

(a) the opposing troops on a battlefield

(b) a military dispatch sent to allied troops behind enemy lines

(a) a temporary or casual shelter or lodging

(b) a shoulder cord worn by designated military aides

(a) a card game resembling chemin de fer, commonly played by soldiers in WWII, in which three hands are dealt and players may bet either or both hands against the dealer's

(b) any of three fixed lines of reference in an aircraft that run in the longitudinal, lateral, and vertical directions, are mutually perpendicular, and usually pass through the aircraft's center of gravity

(d) something immaterial that impedes or separates

(a) an all-out usually desperate attack

(b) a broadax formerly used as a weapon of war

(d) a horse for battle or parade

(a) to make a raid or brief invasion

(b) a front-line soldier in World War I

(d) the regaining of something (as by recapture)

(a) a law set forth by a wartime governmental authority

(b) a prescribed usage, practice, or ceremony

(c) a line along which a battle is fought