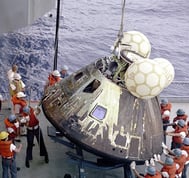 On this day in 1970, with the world anxiously watching, Apollo 13, a U.S. lunar spacecraft that suffered a severe malfunction on its journey to the moon, safely returned to Earth. The Ford Mustang, a two-seat, mid-engine sports car, was officially unveiled by Henry Ford II at the World’s Fair in Flushing Meadows, New York in 1964. That same day, the new car also debuted in Ford showrooms across America and almost 22,000 Mustangs were immediately snapped up by buyers. On this day in 1790, American statesman, printer, scientist, and writer Benjamin Franklin died in Philadelphia at age 84.

Let’s see how you’ll go down in vocabulary history today.