Two Legends and a Fall 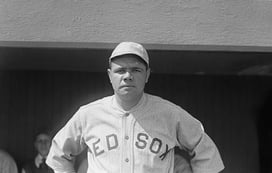 July 11 was a busy day over the years. In 1804, in a duel (aka “an affair of honor”) held in Weehawken, New Jersey, Vice President Aaron Burr fatally shot his long-time political antagonist Alexander Hamilton. Hamilton, a leading Federalist and the chief architect of America’s political economy, died the following day. Burr, having endured murder charges, indictment for treason, and horrible public condemnation, would die in relative obscurity in 1836. Also on this date in 1914, George Herman “Babe” Ruth made his major league baseball debut. And in 1979, Skylab crashed to Earth, injuring no one. Preserve your honor, swing for the cheap seats, and maintain your high-altitude rating by taking today’s combination vocab/science/baseball quiz.

(a) a summons to a duel to answer an affront

(b) a place where a duel is fought

(d) the assistant of a duelist or boxer

(a) an honor or award gained for preeminence

(b) a position or office of honor or profit

(b) rule by the timid

(c) government by the wealthy

(d) government in which love of honor is the ruling principle

(a) all is lost save honor

(b) through difficulties to honors

(a) the statistical analysis of baseball data

(b) the statistical analysis of satellite data

(d) one presented as an award of honor or distinction

8. the primary cause of Skylab’s early demise

(a) toward the earth

(b) being or having an equatorial orbit at an altitude of about 22,300 miles (35,900 kilometers) requiring an angular velocity the same as that of the earth so that the position of a satellite in such an orbit is fixed with respect to the earth

(c) suggestive of earth (as in texture, odor, or color)

(a) a fly ball hit barely beyond a baseball infield

(b) a place where a duel is fought