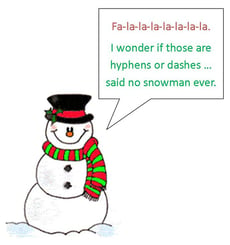 “On Dasher, On Dancer …” Dashing through the snow. Dashing to the store to buy that last-minute gift. Adding a dash of nutmeg to the eggnog. Wearing a dashing get-up for the holiday party. December is downright dashing. Guess what today’s post is about?

Dash most often refers to the longer em dash — like these two — or the shorter en dash, like this one (–). (Chicago Manual of Style also talks about 2-em and 3-em dashes, which are rare in everyday use.)

The em dash is so named because its length equals the width of the typeface’s capital M. The length of the en dash is half that of the em dash. (Contrary to popular belief, the en dash width bears no relation to the letter N.) The hyphen (-) is the shortest of the bunch.

Each mark functions differently, but many of the documents that come through ProofreadNOW.com suggest those distinctions aren’t clear to the masses. We aim to change that.

Remember Spud Webb, the shortest player ever to win the NBA Slam Dunk Contest? The 5'7" former guard had a 42" vertical jump and surprised everyone by beating Atlanta Hawks teammate Dominique Wilkins, nicknamed “The Human Highlight Reel” for his jaw-dropping dunks. Wilkins didn’t even know Webb could dunk.

And so it is with the lowly hyphen. Its function is unremarkable in most instances:

But this unobtrusive little mark actually can be quite a powerhouse when it comes to clarifying a writer’s intention. Consider this example:

Wilbur had to re-sign the contract after the initial version mysteriously disappeared.

Without the hyphen, resign has an entirely different meaning. Here’s another example:

Janice is a short story writer who aspires to do big things.

Is Janice a story writer who is short, or does she write short stories? A simple hyphen clears that up:

Janice is a short-story writer who aspires to do big things.

The need for hyphens in compound modifiers such as the one above has been the subject of great debate, which we’ll sidestep for now. The point here is to show you all the things a hyphen can do rather than delineate all the rules that apply. For all its utility, the hyphen has its limits. It can, and often does, pose as an en dash, but the em dash is way out of its league.

The en dash is used least often of the three marks. Its primary function is to indicate ranges, including:

That’s the rule in Chicago Manual of Style anyway. AP Stylebook doesn’t even recognize the en dash, instead using a closed hyphen in ranges (1999-2000). And some people have applied their own style, using the en dash as an em dash, with a space on both sides, like this:

The thing about rules – at least some people seem to believe – is that they’re made to be broken.

Actually, using an en dash in this way has become acceptable as a stylistic preference. But so often it’s used haphazardly, in which case inconsistency becomes the key concern.

The em dash has been called the most versatile of the three marks in that it can function as an alternative to parentheses, commas or a colon in setting off amplifying or explanatory text. But these marks aren’t wholly interchangeable. The dash adds more emphasis to the set-off text and is the best choice for signaling an interruption or abrupt change of thought. Notice how dashes can subtly change the tone and emphasis of a sentence:

Who would have believed that Spud Webb, all 5'7" of him, could beat Dominique Wilkins in a slam-dunk contest?

Who would have believed that Spud Webb — all 5'7" of him — could beat Dominique Wilkins in a slam-dunk contest?

Eleanor wanted only one thing for Christmas: a long vacation in the Caribbean.

Eleanor wanted only two things for Christmas — a long vacation in the Caribbean and someone to accompany her.

Whether to use an open (with spaces) or closed (no spaces) em dash is a matter of style: Chicago says no, AP says yes.

You’ll get more impact with em dashes by using them judiciously. Using too many of them has the effect of emphasizing nothing and can leave readers feeling as though they’re hanging on through a rough roller-coaster ride that whips them one way, then another, then back again, with no clear end in sight, like this:

If you’re considering using dashes — and they can be very effective punctuation — do so sparingly — more than that can be too much of a good thing, if you know what I mean — and avoid using more than one pair in a sentence — or even in a paragraph. In other words — be kind to your readers.

If you find yourself in a mad dash to wrap up those year-end projects, let ProofreadNOW.com gift you with the peace of mind that comes with knowing they’ll go out in tip-top shape. Contact us to request a quote or free proofreading sample.