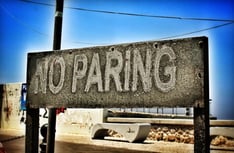 Everyone makes typos. Yes, everyone! World leaders, university professors, famous authors and (gulp) even professional editors occasionally miss a keystroke or three. The very best writers make the same mistakes as the rest of us. What sets them apart is that they understand the importance of having others review their work for grammar, spelling, punctuation, style and structure.

Proofreaders frequently hear the following from writers: “I made a few typos. What’s the big deal?”

It’s true that many of the most common typos – “teh” instead of “the,” for example – are pretty minor. They can make your writing look sloppy and unprofessional, but they won’t go viral and turn you into the laughingstock of the Internet. Besides, spellcheck will catch your typos, right?

Spellcheck will indeed fix some typos that are blatant misspellings of relatively common words. However, a word mistyped is not necessarily a word misspelled. Spellcheck can’t read your mind. If you’re aiming for “accept,” it’s not going to flag you for typing “except,” because “except” is also a word. That’s a tame example – it can get much, much worse. One misplaced letter is all it takes.

Read on, laugh -- and hire good proofreaders to ensure that it never happens to you!

What they meant: “public”
What they wrote: “pubic” 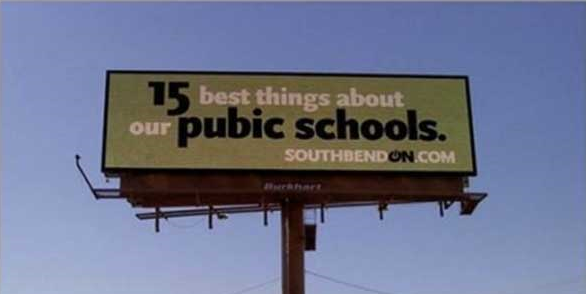 This is the sort of typo that gives editors nightmares. Think about some of the contexts in which the word “public” is commonly used – public employees, public benefits, public health – and you’ll understand why. Bottom line: If you plan to use the word “public” on a billboard, check it twice. Then check it four more times just to be certain. You cannot possibly be too careful with this one.

What they meant: “prostate”
What they wrote: “prostrate” 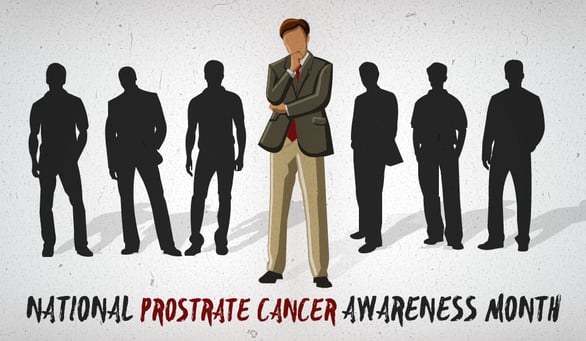 One of these words means “lying down.” The other is a gland that plays an important role in the male reproductive system. You’d be surprised how often writers confuse the two. Let’s just say that a “prostrate exam” is probably far less invasive than the other kind.

What they meant: “drums”
What they wrote: “drugs” 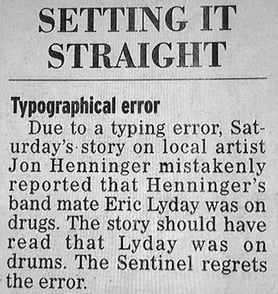 Even innocuous typos can trip up writers who aren’t on their guard. In fact, unusual typos can pose a greater threat than the infamous kind. In this case, a single mistyped letter transformed a simple descriptor into a potentially libelous statement – and a musician into a criminal!

What they meant: “tenets”
What they wrote: “tenants”

Tenants are people who rent from you. Tenets are guiding principles or beliefs, and they do not pay rent. Unless you’re a landlord in a university town, your business is probably not based on philosophical tenants.

What they meant: “complement”
What they wrote: “compliment”

Even the best writers mix up these two. A compliment is a flattering remark; a complement, in this sense, is a complete number. In verb form, it’s a bit more confusing: An accessory that goes well with a piece of clothing is said to complement it. Good editors are always on their guard against this particularly confusing set of homophones.

What they meant: “inconvenience”
What they wrote: “incontinent” 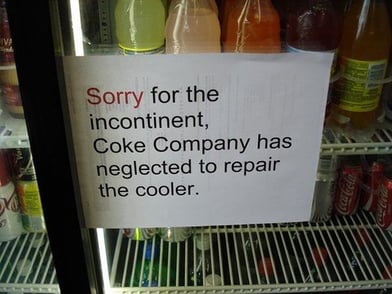 What can we say about this one? Spellcheck won’t catch this but your readers will!

What they meant: “fences”
What they wrote: “feces” 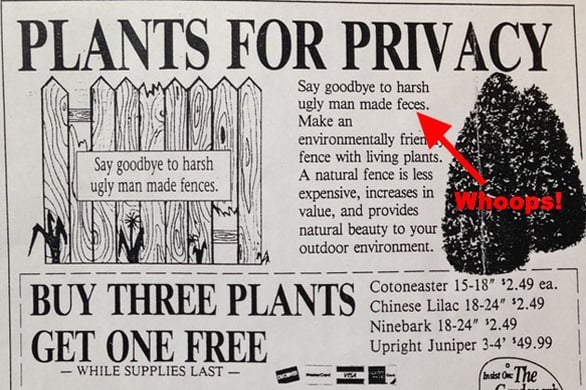 Again, a single letter makes all the difference between something that protects your yard from the neighbor’s dogs and the malodorous results of their visits.

What they meant: “bowl”
What they wrote: “bowel” 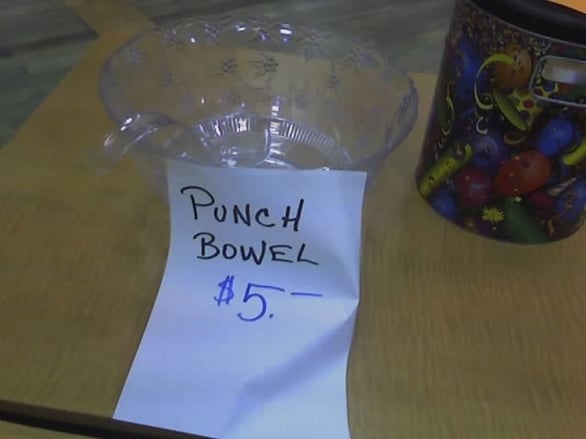 We really hope no one took this sign literally.

What’s the worst typo you’ve ever seen? Share in the comments!