Grammar Rules You Can and Should Break in Your Marketing Copy 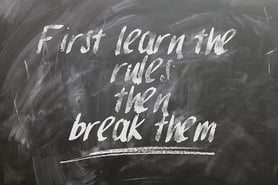 As a writer and a professional, you should always strive to be grammatically correct. However, there are times when it’s less important to follow strict grammar rules and more important to connect with your audience. Especially when you’re attempting to inform or persuade an audience about an idea or product.

You can’t truly connect with your audience if you aren’t speaking their language. And if you truly want to speak their language, you will be conversational yet professional in your copy. Sometimes this means you’ll have to break some of the rules, like the ones listed below.

Ending a Sentence with a Preposition

Rule: A preposition is supposed to relate one word or phrase to another and is followed by the object of a sentence; therefore, a sentence cannot end with a preposition. Typically, prepositions are used to express place (e.g., “to the beach”) or time (e.g., “before the blizzard”).

This rule was associated with Latin grammar hundreds of years ago, and doesn’t really fit inside the realm of modern English grammar. To adhere to this rule, some writers will contort their sentences so unnaturally that they risk coming across as arrogant or stuffy.

If you want to have a natural and conversational tone in your copy, then ditch this rule.

Beginning a Sentence with a Conjunction

Rule: Don’t use a conjunction such as “and,” “but,” or “or” at the beginning of a sentence.  Conjunctions are typically used to combine or coordinate separate clauses within a sentence; therefore, a sentence cannot begin with one.

And then I went to the supermarket.

But due to the rain, we’ll have to postpone the event.

This rule has no historical or grammatical backing. Even conservative grammarians often ignore it. The argument against using conjunctions to introduce a sentence is that such a sentence expresses an incomplete thought or “fragment” and is therefore incorrect. However, writers often ignore this rule for a forceful or dramatic effect. For instance, “Bob neglected to answer their cries. But why?” They also ignore it because if the sentence contains a subject and predicate (as in, “And then I went home.”) it’s a sentence. If it doesn’t (“and then home”), it’s not.

If you decide to forgo this rule, do so for a deliberate purpose and in moderation. Remember that using conjunctions within sentences still serves a purpose too.

Rule: Split infinitives happen when you put an adverb between “to” and a verb. There’s no real known justification for this rule, which was originally based on comparisons in Latin grammar.

Adding an adverb this way can have a strong emphatic effect in marketing copy, while making the copy more appealing to your audience. For example, instead of writing, “You have to really watch him” you might want to write, “You really have to watch him.” Which option will be more appealing or emphatic to the audience of your copy?

Rule: Two negative elements inside a sentence cancel each other out to give a positive statement instead.

We didn’t see nothing.

I can’t get no satisfaction.

If we are to add up our negatives to equal a positive, the latter statement above would mean, “I am able to be satisfied.” But it’s not very likely that’s what Mick Jagger meant when he wrote that lyric for the famous Rolling Stones’ song.

While double negatives should be avoided as often as possible, there are situations where they’re used to make a bold statement subtler.

When appropriate, the above rules can and should be broken if you want your marketing copy to connect with a real audience. Are there any other grammar rules you can think of that are meant to be broken in marketing copy? If so, let us know in the comments below.