The subjunctive mood expresses something hypothetical, things that haven’t happened yet, and can be either positive or negative. Use this mood when offering a suggestion, or when expressing doubt, desire, or possibility.

Example: I wish I were in Paris right now.

The imperative mood expresses commands or requests for an action that can be either positive or negative. Use this mood when you want someone to do something.

Tone of voice indicates how a writer feels about a subject, an audience, or even about herself. Here are a few grammatical components that go behind building a writer’s tone of voice.

Typically subjects that are more active appear more self-reliant and are perceived to have a stronger sense of urgency. Often, when the passive voice is used, the actor of the sentence no longer holds the focus of the sentence and is sometimes omitted altogether. Consider the different emotional tones these two sentences convey.

Passive: Every year, thousands of people are killed by drunk drivers.

The words you choose to write are extremely important when attempting to convey meaning or emotion to your readers. Your choice in adjectives, verbs, and adverbs can change the entire tone of your writing. Think about the following examples and the different tones they convey after only one word is changed.

Original: He was a brash man.

Modified: He was an audacious man.

Original: I challenge you to consider my offer.

Modified: I encourage you to consider my offer.

How you place words in a sentence also matters when you’re trying to convey a specific tone or emotion. The general word order of an English sentence is “Subject + Verb + Object." However, writers will shift this general word order around to emphasize something or heighten a connection between two words. Here is an example.

Modified: Because she was excited, the girl applauded.

Usually when writers think of expressing emotions in their writing, they immediately think of using interjections. An interjection is a word used to express sudden emotions, like feelings of surprise, joy, anger, grief, wonder, fear, or regret. They aren’t normally connected to other parts of a sentence and are frequently followed by an exclamation point. They are typically used in informal writing or fiction.

When you can’t seem to find the right arrangement of words to convey your emotions, using the right punctuation can certainly help. Sometimes proper punctuation is even necessary to convey a specific emotion in your writing.

The next time you’re typing an email or social media post and get the urge to include a smiley face or write in all caps, consider conveying your emotional state with some of the grammatical techniques highlighted above instead. Ask yourself if you still feel like you’re connecting with your readers when you do.

How do you convey emotions when you write? Share with us by commenting below.

Want to improve your writing vocabulary?  Sign up for our vocabulary quizzes by clicking below. 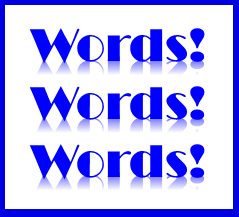