Lie or Lay? Get It Right Every Time 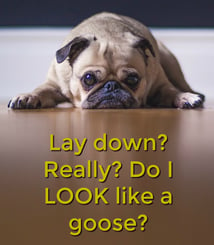 The lay vs. lie question frequently generates a lot of fireworks, so it seems an appropriate one to address following the Fourth of July.

Substituting lay (to place or arrange) for lie (to recline or be situated) is undoubtedly one of the most common usage errors in English. Why? Because, for one thing, the past tense of lie is lay. For another, lie can also mean to fib, and using the word correctly might lead to ambiguity in certain instances, as here: Eric is lying about the house.

Is he lounging around, or telling a fib about the house? Context, of course, would provide the needed clarity, but perhaps to avoid potential confusion, our brains default to the word that, although incorrect, leaves no doubt about the meaning. Who knows? Neurolinguistics is hardly my area of expertise …

Whatever the reasons for the confusion, let’s try to clear it up once and for all.

Remembering which word to use is easiest with the present tense. Lay is a transitive verb, meaning it’s followed by a direct object (i.e., whatever is being placed or arranged, shown here in bold): Will you lay the blanket on the bed?

Lie is intransitive, meaning it doesn’t need a direct object for the sentence to make sense: Maria lies down for 20 minutes every night after work.

An easy way to remember which word to use in the present tense is this:

If that’s too much to keep straight (and it’s nearly impossible for most folks), the following chart might help:

A Place for Everything

If the transitive/intransitive, direct object/no object distinctions make your eyes glaze over, there’s an easier way — and it works for all forms of the verb. Not sure whether to use lie or lay or some variation of either? Substitute the word place (or placed or placing, as appropriate to the context). If the sentence makes sense with some form of place, use the corresponding form of lay. Otherwise, use the appropriate form of lie. Let’s try it out (correct answers in green):

Michael [laid/lay] awake many nights worrying about his future. You wouldn’t say “Michael placed awake,” so the past tense of lay (i.e., laid) is incorrect.

I need the third book in that stack [laying/lying] on the table. The stack isn’t placing on the table, so the present participle of lie is correct.

The ground troops [lay/laid] in waiting for nearly 20 hours before the enemy appeared. You wouldn’t say they placed in waiting, so the past tense of lie is correct.

Let us know in the comments below if you find these tips useful, and whether you know of any other tricks for distinguishing lie and lay.