Rescue Your Writing from Redundancy 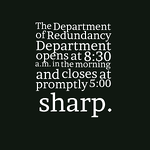 The new year is an absolutely perfect time to make new beginnings in many areas, including your writing. In the same way you might clear out and unclutter your house or apartment, you can rid your writing of redundancies, tautologies and pleonasms — those repetitive words and phrases that include but are not limited to extra words that say the same thing (e.g., begin anew, free gift), words used with acronyms that are part of the acronym (e.g., PIN number, UPC code) and superlatives used for emphasis (e.g., absolutely perfect). The end result will be a positive improvement in your writing, making it tighter, much more concise and infinitely clearer.

Whew! Did getting through that paragraph feel like trying to clear a path through the underbrush in the Amazon rainforest with a butter knife? No doubt. It’s a morass of words competing with each other to say the same thing. That’s redundancy. Let’s see what happens when we eliminate all the extra words:

The new year is a perfect time to spruce up your writing. In the same way you might unclutter your house, you can clear the redundancies from your communications. Redundancies, also called tautologies or pleonasms, are words that mean the same. They can also take the form of words used with acronyms that are part of the acronym or superlatives used for emphasis. Some examples follow. Eliminating redundancies will make your writing markedly more concise and clear.

We’ve trimmed 32 words, many of them redundant, and created a paragraph that’s considerably easier to read. Here are some of the offenders: absolutely perfect, new beginnings, include but not limited to, end result, positive improvement.

“Include but not limited to” is one of many redundancies commonly found in legal language. “Include” means to make a part of something — it doesn’t mean all-encompassing. So to add “but not limited to” is redundant. Laws and other legal documents — whether pleadings, disclaimers, contracts, etc. — are filled with similar tautologies (the saying of the same thing twice in different words): cease and desist, aid and abet, null and void, terms and conditions, indicted on a charge, false pretenses, and on and on. For a profession steeped in tradition, change is difficult — as is convincing lawyers who’ve been trained to cover every possible contingency that one word conveys the meaning more clearly than five. So when we’re proofing strictly legal language for ProofreadNOW.com customers, we tend to leave any redundancies alone.

Legal marketing pieces (e.g., alerts, brochures, newsletters, website copy) are another story. That’s because their purpose and audience are different. Legal marketing, like all marketing, is designed to increase business. The goal is to communicate clearly and effectively in a way that resonates with the intended audience. And yet … think about all the redundancies you regularly see in marketing pieces: desirable benefits, added bonus, free gift, introducing a new …, knowledgeable experts, No. 1 leader, and so on.

The business/financial arena is also fertile ground for redundancy. Here are some examples from recent documents that have come through ProofreadNOW.com: enclosed herein, currently are, during the course of, appreciate/depreciate in value, current trend, ask the question, end result, final outcome, estimated at about, plan ahead, proposed plan, lag behind, look ahead to the future, reflect back on, new beginning/construction/innovation/invention/recruit, reason is because, reason why, still remains, and sum total.

So many of these phrases have become staples in writing that identifying them can be tricky. One of the best ways to root out redundancy is to develop your understanding of what words really mean (a dictionary or thesaurus can be invaluable) and to pay attention to those meanings when you’re writing and editing. Look closely at the adjectives and adverbs you’re using — do they say the same thing as the words they’re modifying (e.g., old adage, serious danger, conceivably could). Red flags include “absolutely,” “best” and other superlatives as well as “very” — as in “very rare.” When you find a suspected redundancy, ask yourself whether any other kind of [blank] is possible. For example, is an old innovation possible? Can danger be anything other than serious? If something is rare (i.e., the superlative or extreme of its kind), can it be any more than that?

Other than tautologies that have become common parlance like the legal ones noted above, is using redundant language sometimes OK? Of course. The English language is chock-full of exceptions for nearly every rule. But you have to know the rules in order to break them effectively. You can use pleonasm (the use of more words than are necessary to convey meaning) for emphasis (e.g., “you have to see it with your own eyes to believe it”) or to subliminally target your prospects (e.g., marketers will often use “free gift” because everyone likes free things). As is often the case, let context be your guide.

We at ProofreadNOW.com personally believe that eliminating redundancies and tautology will take your writing up to the next level. The end result will be writing that is effective, engaging and the absolute best it can be. Feel free to share with us in the comments how you’d eliminate the redundancy in those two sentences.

Why not test our service to see how we deal with redundancies? Click below to have us proofread a document for you at no charge.