10 Things That Are Strange to Non-Native English Speakers 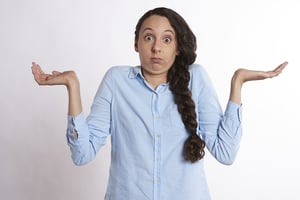 Here are ten things that can seem strange to non-native English speakers.

1. Questions and Answers With Both Affirming and Negating Terms

In other languages, or even various dialects of English, people would say “it is half past two” or “it is half of three” when telling time. They would not say “It is 2:30.”

4. The Fact That Spelling Doesn’t Always Indicate How a Word Is Pronounced

In the English language, how a word is used in a sentence can determine its pronunciation and not necessarily how it’s spelled. For example, the word “read” can be used in the past tense or the future tense in a sentence depending on the context of the sentence and will be pronounced differently in each tense.

And many words have the same letter combinations but aren’t pronounced the same way. Consider the following words and how they’re spelled versus how they’re pronounced.

5. Understanding That There Is No Gender-Neutral Pronoun

In a lot of other languages, such as Scandinavian, there are gender-neutral pronouns like “hen.” So speakers can avoid using gender specific pronouns like “she” and “he” when referring to a person.

In other languages like Spanish, speakers can indicate whether they “love” a family member, a friend, a romantic partner, or an inanimate object. But in English, there is only the one word “love” that’s used to indicate affection for someone or something. And in English, there sometimes is a distinction made between the phrases “I love you” and “I am in love with you,” which can be confusing.

7. Making the Distinction Between “in” and “on” and Other Phrases Involving Motion

8. Rigid Rules for Ordering Adjectives to Describe a Noun

For example, native English speakers would say you can have a “really large old oval-shaped green French wood vanity mirror,” but you can’t have a “green French old vanity wood oval-shaped really large mirror.” (And note that when the modifiers are in this hierarchical order, no commas are needed.)

It’s confusing that some words like “asthma,” “knife,” and “plumber” have silent letters in them. Most native English speakers would probably claim that this is odd too. It makes learning how to spell words in English unnecessarily difficult.

10. Knowing When to Add “s” to Pluralize Nouns

Some nouns don’t require an “s” at the end of them when they are plural, such as “fish,” “sheep,” and “elk.” However, some nouns are only used in the plural form, such as “scissors,” “goggles,” and “clothes.”

Let’s admit it, sometimes the English language is weird, which is also what makes it so fascinating. Check out Ten Things You Might Not Have Known About the English Language for more interesting facts and anecdotes.

Have the items on the list above ever confused you, even if you are a native English speaker? Or have you noticed similar confusing language practices and rules in another language that you speak? Leave a comment below and join the conversation.