5 Tips to Become a Better Speller 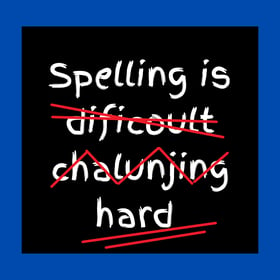 If you are a self-proclaimed “terrible speller,” here are some easy tips to reduce the cringe. We triple counted them, so we know there are definitely five.

These tips will not only help you spell better, but they’ll also provide more sense and logic to the phonetic dependability of the English language.*

1. Check out etymology. I’m sorry. I used a tough word to spell right out of the gate, like a big, arrogant stinker. Let me explain. Etymology is the history of a word — where it came from and what it means because of that. If you come across a word you don’t know or that you can’t spell, look it up, but don’t just grab the spelling and move on. Find the root of the word. Chances are it’s used in other words. Learn why words mean what they do.

Once you recognize groups of words, including those that were borrowed from other languages, you’ll be able to notice patterns in their spellings. You’ll also recognize parts of words that have specific meanings. It’s like getting a cheat sheet for a spelling quiz, every time.

3. Break words apart, literally (prefix/suffix/roots). Find a list of the most common prefixes and suffixes and learn their meanings. Try to pinpoint the root of a word before you spell it.

Pre- meaning before. Anti- meaning against. Pro- meaning for, in affirmation of. -Ly meaning characterized by or like in appearance. -Tion used to turn verbs into nouns to describe a state, process, or condition.

Acknowledge. Knowledge. Know. Funniest. Funny. Fun. Once you’ve stripped them down, add in the surrounding parts, taking into account spelling rules. In the second example, we need to change the “y” in “funny” to an “i” to preserve the long “e” sound of the “y,” otherwise, it will be pronounced “fun-yest.”

4. Find some dependable rules, based on phonetics. Contrary to a more recent popular educational approach and perspective, English is a phonetic language. All but a few of the most common English words can be spelled and pronounced using phonetics.**


Here are a few examples of spelling/pronunciation rules to aid you:

5. Read. Then read some more. And then a little bit more. You’re encoding the meaning, spelling, and context of every single word over and over as you read. This knowledge will reward you with effortless recall over time. Don’t put any effort into this one. Just feed your mind with words.

If you’re desperate, here’s the best resource we’ve ever come across (and used to great effect) for children and adults, native and non-native English speakers, and even those with dyslexia: All About Learning Press.

* Since we’re based in the United States, we are ascribing to North American spellings and phonetics, though most of the same rules apply to other English dialects.

** Check out this video for an explanation.

*** You’re going to point out rule-breakers. We respect that. Our well-researched response? Those are words that are directly borrowed from other languages, so we would learn those in groups and not apply the first listed rule, though the other phonetic rules apply. See additional footnotes.

¥ Once again, we mean words that are not borrowed from languages with different roots, which are less common (e.g., stimuli, alibi, abaci, etc., which are all Latin).

§ See the third footnote. “Adieu,” “bayou,” “bandeau” are French-based examples that are not true rule-breakers. “You” is the only English word that exists as an apparent exception, with the simple explanation that it exists as an abbreviation of a prior, longer form of the same meaning.