Do Emojis Belong in Business Writing? 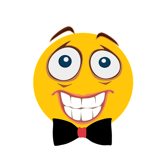 Emojis started to gain popularity after people began to use a colon and a comma to indicate a smiley face :) or a sad face :( in their text messages and emails (a.k.a. emoticons). Then after smartphones came along, the world of emojis began to expand far beyond the smiley and sad face emoticons. Now we have emojis for the “wow” face, the “laughing so hard I’m crying” face, as well as animal emojis, plant emojis, holiday emojis… and the list goes on and on.

Some individuals will send emojis in every piece of communication they type, whether they’re for work or not. They would probably write entire paragraphs using emojis if they could. Other individuals are convinced that emojis are sending us down a path that leads directly to the complete destruction of the English language as we know it.

So, where do emojis belong in writing? Are there any rules you need to know?

Emojis Are Already in the Workplace

Like it or not, emojis are already being used in the workplace at regular intervals and by most people. But before you start blaming millennials for the sudden widespread use of emojis in the workplace, multiple survey results indicate that members of all generations are culprits. And as far back as 2014, in a Cotap survey, 76% of Americans claimed they used emojis at work.

However, while most employees admit to using emojis, over 50% of executives claim that it’s never appropriate to use emojis at work. So, while it may be acceptable to send emojis to your co-workers or immediate boss on occasion, it’s probably not a good idea to send them in communications intended for upper management.

When to Use Emojis in the Workplace

Many professionals think that using emojis in the workplace is acceptable when they help soften the blow of bad news, or when they’re used to build rapport with a client or colleague. However, research has shown that smiley faces in emails don't affect the perception of warmth intended by the sender at all, but are more likely to lower the perception of the sender’s competence.

Meanwhile, more and more workplaces are embracing communication platforms like Slack and Google Hangouts, which encourage emoji use to build rapport among employees. Whether you should use emojis at work might depend on the culture of your whole workplace. If you work in a more conservative industry (e.g., finance, legal, or government), you will want to wait for other colleagues or superiors to send emojis your way first before you use them.

As a rule of thumb, until you have already established a friendly and close relationship with someone in the workplace, it’s usually advisable to not send emojis in communications. It should also be mentioned that emojis are never acceptable in official reports, important client emails, and communications with partners. If something has the potential of becoming part of a permanent record (e.g., a contract or proposal), it should most certainly not contain emojis.

Emojis with Different Meanings in Other Parts of the World

If you decide it’s acceptable to send emojis in your communications to colleagues or friends, make sure you know what they mean first. Emojis can have different meanings depending on the part of the world you’re in, the device you’re using, or even the conversation you had with your recipient prior to sending them. There are some commonly confused emojis you should avoid (see some examples below, all from emojipedia.org). But regardless of the emoji you’re using, make sure your recipient understands the emotion and intent you’re trying to convey in whatever it is you’re writing, before you send it. Otherwise, you risk inciting sincere miscommunication mishaps, or even the possibility of deeply offending someone.

While the girl flicking her hair is meant to represent an information desk person, many people use this to be sassy or cheeky. And the emoji on the right, shows a girl making an 'OK' sign.

The emoji on the left is often used to mean dead or astonished while the hushed face emoji on the right is used to show surprise. 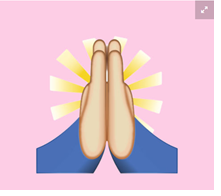 Some people use this to signify a high five. But this is actually meant to be a person who is praying or bowing. 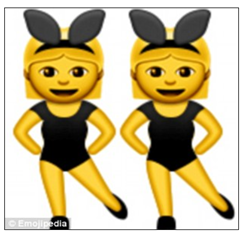 This emoji is meant to represent the Bunny Girl, the Japanese equivalent of the Playboy Bunny. But the women with bunny ears have come to be used to say "we're best friends" or "let's have fun together."

Although these emojis are meant to be the same, they vary dramatically across platforms, as you can see. This makes it easy for readers to be confused.

Is the widespread use of emojis a sign that written communication is deteriorating as we know it? Not necessarily. Are we regressing to a time when hieroglyphs were used as the fundamental elements in written communication? Not exactly. Should we fully embrace using emojis in everything we write? Unequivocally, no—especially not in the workplace.

It seems emojis are still mostly being used in text messages between individuals who already know each other, and more casual email communications between individuals with an already established rapport. Individuals tend to use emojis in short messages and to further emphasize emotional context of a written message, which is where their value lies. Emojis are not replacing written communication on a wide scale by any means. And until emoji-related courses start replacing grammar and language courses in schools, it doesn’t seem they are deemed as an official means of written communication.

What are your thoughts about emojis in writing? Do you think they enhance or deter the meaning of written text? Share with us in the comments below.