Fact Checking the Story of Christmas 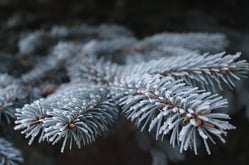 According to Pew Research, 92% of Americans claim to celebrate Christmas. And many of them believe that the story of Christmas is historically accurate, regardless of their religious affiliation. So, whether you prefer to say “Merry Christmas,” “Happy Hanukkah,” “Happy Kwanzaa” or simply “Happy Holidays,” you likely share some of the same traditions as most Americans, as well as 2 billion other people around the world.

So, what are the origins of the Christmas story that we know today, and where did our cultural traditions originate?

A Brief History of Christmastime

“Christmas” is derived from “Christ’s Mass,” and denotes the celebration of Jesus Christ’s birth. The oldest existing record of a feast to celebrate the birth of Christ is in the Roman almanac called the Chronographer of 354, dated around the beginning of the winter solstice (around December 25) in the year 336. Before this entry was recorded, Christians were known to only celebrate Christ’s resurrection, which came to be known as Easter. So why did Christians finally decide to celebrate the birth of Christ in the middle of winter three hundred years after he was alive?

The exact dates surrounding the birth of Jesus are not mentioned in the Bible. For centuries, scholars have been debating when Jesus was born and when to celebrate his birth. But Emperor Constantine (the first Christian Roman emperor) and Pope Julius I declared December 25 as the official date that Christ’s birth would be celebrated, and that date gained worldwide traction.

Paganism was the dominant “religion” in many parts of the world (and held many customs in a wide variety of sects) around the time that Christ was born. Pagans celebrated the winter solstice, which takes place around December 25, with elaborate traditions and festivals.

Whether Christians intentionally embraced pagan traditions to promote the celebration of Christ’s birth, or situated Christ’s birth near the winter solstice to overpower the practice of paganism, the facts show that they culturally occurred together. Christmas, as we celebrate it today, is derived from traditions carried out by pagans and was influenced by this time period. And since many individuals identify Christmas as a cultural celebration with cultural traditions, uncovering the facts behind these traditions is important.

In the Gospel, the wise men gifted the infant Christ with gold, frankincense, and myrrh. It was customary in ancient Rome to bring an infant king gifts; the wise men recognized the infant as a new king. Roman emperors also compelled some of their subjects to bring them gifts at the beginning of each year around this time in history. Eventually this practice trickled down to commoners.

Additionally, pagans had partaken in gift giving on the first day of January for centuries, in celebration of Kalends, while they were celebrating the rebirth of the sun and the new year. Other pagan traditions that started before the documented birth of Christ involved giving gifts to children, neighbors, and the poor, in celebration of Saturnalia and the birth of the god Mithra.

Songs were sung during pagan celebrations of the winter solstice well before the birth of Christ. The word “carol” is derived from the Latin word “choraula,” and means “a circular dance with singing.” Typically, during each of the four seasons, pagans would congregate and sing and dance, while dressed up in costumes.

In Scandinavia, the Norse celebrated Yule around the time of the winter solstice, and were doing so well before the birth of Christ. Males would bring home large logs, which they would set on a fire, and their communities would feast until the log burned out many days later.

During the time of Christ’s birth, it was customary to feast during the winter months regardless of one’s religious affiliation. Cattle and other animals were slaughtered so they wouldn’t have to be fed during winter months when crops were scarce due to the frigid weather.

Before Christ’s birth, Romans decorated evergreen trees with trinkets and topped them with an image of their sun god. Druid sorcerers hung golden apples and lit candles on oak trees to celebrate the winter solstice. The green plants were regarded as a symbol of life during the cold winter months.

Evergreen trees became part of Christian Christmas celebrations around 400 years ago in Germany and spread to most of northern Europe by the 19th century.

The facts show how the story of Christmas and its traditions evolved from a variety of cultural influences and religions prevalent during the time Christ was born. Now that you know the facts, you can share them with your family and friends while you exchange gifts, sing carols, decorate your tree, and feast.

Happy holidays from all of us at ProofreadNOW.com!