Internet: Making the Case for Lowercase 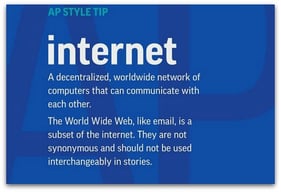 The release of the 2016 AP Stylebook on June 1 tolled the blessed end of a style point I’ve never understood: the capitalization of internet (and the related web). It evokes a similar sense of satisfaction as AP’s decisions in 2010 to use website instead of Web site and in 2011 to use email instead of e-mail.

Not everyone feels the same way …

Some have called the decision “a shame,” “sad,” “a bad call” and “embarrassing.” Others have staunchly refused to make the change.

On the flip side are comments such as “What took so long?,” “It’s about time!” and “We’ve been lowercasing internet since 1999.”

Why the Big Fuss?

The presence of the article the before internet calls for capitalizing, according to linguistic opponents to the change. Because “the Internet” is the big kahuna of global computer networks that evolved out of ARPANET (the Pentagon’s network), it should retain the initial capital to distinguish it from generic internets connecting a bunch of smaller networks — not unlike how we use Constitution to refer to the American foundational document and constitution in reference to similar state documents.

So for now, Oxford Dictionaries is continuing to capitalize the words, as is Merriam-Webster. According to Associate Editor Emily Brewster, “It will be very interesting to see at what point writers and editors put internet in lowercase. That’s what we’re waiting for.”

The wait may be a short one.

As Martin notes, in the UK, lowercase internet is far more common (about 75%) and preferred among many mainstream outlets, including the Economist, Guardian, Financial Times and the BBC. In the U.S., early adopters have tended to be online or tech-focused outlets (Wired, Buzzfeed, Vox, Gawker, The Verge).

AP Standards Editor Thomas Kent justified the change by saying the decision reflects “a growing trend toward lowercasing both words.”

Susan Herring, a professor of information science and linguistics at Indiana University, says it’s only a matter of time before the lowercase version becomes the norm:

The fact is, decapitalizing internet is part of a universal linguistic tendency to reduce the amount of effort required to produce and process commonly used words. Not only does decapitalization save a click of the shift key, but, as one marketing website put it, “Capital letters are speed bumps for the eyes when reading. They should be eliminated when possible.”

My own views on the subject began to take shape in 2004 after reading an article by Wired News Copy Chief Tony Long asserting “there is no earthly reason to capitalize” internet, web or net:

[A] change in our house style was necessary to put into perspective what the internet is: another medium for delivering and receiving information. That it transformed human communication is beyond dispute. But no more than movable type did in its day. Or the radio. Or television.

Never mind that Wired has been capitalizing the term since 2006 after Condé Nast bought it … But with the new AP rule, it likely will revert to the usage Tony Long advocated 12 years ago.

As will many other mainstream publications. The New York Times, Wall Street Journal and Chicago Tribune, among others, are already on board. So are we at ProofreadNOW.com — when a client specifies AP style, we’re now changing capitalized instances of internet and web to lowercase. Unless, of course, they ask us not to.

What do you think … yea or nay on lowercasing? Let us know in the comments below.