Into (and out of) the Mystic 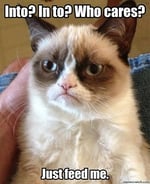 Last week we talked about when to use onto (one word) versus on to (two words). As promised, we’re talking about the distinction between into versus in to this week. While some of the same guidelines apply, into can be trickier because it has more definitions and different strategies for remembering which form to use.

1. Into can indicate entry, insertion or inclusion:


2. Into can apply to a state, condition or transformation:

3. It can also apply to an occupation or action:

6. Into can refer to a point in time or space:

7. In math, into can be used to indicate the dividend in division.

Look at each word or phrase following into above. Notice anything? Yep, they’re all nouns or noun phrases. In fact, into (one word) is usually followed by a noun or noun phrase. BUT (you knew it was coming, right?) … that’s not always the case. Check out the first example in the next section: Account is a noun, and it follows in to (two words).

Frustrating, isn’t it? As much as we want hard-and-fast rules, the English language is full of exceptions. But at least we can narrow the possibilities by using the guidelines that are available.

Moving On to In To

As with on to, when in to is two words, in functions as part of the verb phrase (bold italic text in each example below), and to is a preposition (orange text) or part of the infinitive (green text):

Tune in to learn more.

A common recommendation for when to use in to as two words is that if the sentence makes sense when you insert “in order” between in and to, use two words. That advice works for the second example above (Tune in in order to learn more) but not for the first. So although it’s not foolproof advice for when to use in to (two words), it’s a good starting point.

One Word or Two?

The first example in the preceding section often proves the most challenging because many have trouble distinguishing whether in is part of the verb phrase. The confusion is understandable when you look at the examples in the first section above, in which into (one word) always follows a verb: come into, look into, launched into. It gets even more muddled when you compare two sentences using the same verb (e.g., turned) but different forms of into:

This is where the above definitions of into come in handy. The first sentence meets the criteria of definition no. 2, so into (one word) is correct. Unless the student in the second example is David Copperfield, transforming the paper into a teacher is unlikely (i.e., the sentence doesn’t make sense with into), so in to is correct.

So, to figure out whether to use into (one word) or in to (two words), follow these guidelines:

Let us know in the comments if these guidelines are helpful, or if you have questions about specific usages of into versus in to.

Topics: into versus in to