North, South, West, East … Capitalizing Can Be a Beast 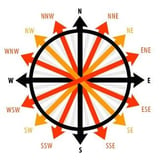 st? Rudderless? Unsure which way to turn? Unfortunately, we can’t help you find your way. We are, after all, a proofreading site. BUT … we can offer some direction on directions — specifically, whether to capitalize them.

At the most basic level, the standard advice is to lowercase north, south, east and west when used as compass directions and to capitalize them when they are used as part of a proper noun or adjective or refer to regions or geographic areas. So:

Easy enough to remember, right? The tricky part is how to navigate related words such as northern, southern, eastern and western. We could tell you to look it up, but the rules in the go-to general style guides — AP Stylebook and Chicago Manual of Style (CMOS) — conflict in some instances.


*CMOS would capitalize Southern and Southerner only in American Civil War contexts.

For instance, should “southern California” be lowercase? Until its 16th edition, CMOS thought so. And if you don’t live in the area, would you recognize “South Texas” as a popular description of the region around San Antonio?

No wonder directions are so confusing. Stop the car! If your current map isn’t cutting it — or Siri is taking you on the scenic route when you specifically told her “get me there, stat!” — it’s time for some new navigation. In this case, we at ProofreadNOW.com like to rely on the straightforward approach in the Gregg Reference Manual.

Regarding these last two examples, if you’re not sure about whether a particular region should be capitalized, look it up. Well-recognized regions are usually described as such online. Also, let context be your guide. If you’re writing an article about economic growth in eastern Michigan, you may want to capitalize Eastern, but a passing reference to the area in another context would be lowercase because the region isn’t recognized as such, unlike Southeast Michigan (also called Southeastern Michigan).

Because of the numerous stylistic variations, coming up with one right answer for questions beyond those relating to compass directions or obvious regions is difficult. Even CMOS hedges its advice by saying, “Note that exceptions based on specific regional, political or historical contexts are inevitable and that an author’s strong preference should usually be respected.”

The key here is to be consistent and, when appropriate, to let context guide you. And if you get lost along the way, don’t be afraid to stop and ask for directions, either by posting your question in the comments below or by asking our grammar experts.