Origins of Holiday Stories from Around the World 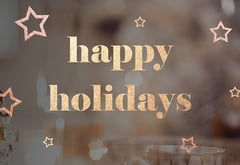 What we know as Christmas today is one of the most popular holidays celebrated around the world, when millions of people participate in festivities and traditions. Whether you call it Christmas or something else, the popular winter holiday is a byproduct of secular and religious traditions that have evolved over the past several hundred years. It’s a time for family and friends to come together, decorate their homes, exchange gifts, feast, be merry, and extend their generosity to their neighbors and greater communities. Here are some notable holiday stories from around the world and their origins. You’ll notice that all their origins lie in an explanation for gift-giving.

The Story of Santa Claus

Today we know Santa Claus as a jolly plump man who wears a red suit and spectacles, and lives at the North Pole. He operates a toy workshop with elves, and keeps a list year-round that indicates which children around the world are naughty and nice. And he travels on Christmas Eve in a sleigh pulled by reindeer to deliver gifts or coal, depending on which list you’re on. But the story of Santa Claus didn’t always go like that. In fact, its origins are hundreds of years ago.

The story of Santa Claus began with a monk named Saint Nicholas who was born around A.D. 280 in modern-day Turkey. He was much admired for his generosity and eventually became a popular saint across Europe for centuries, and in different sects of Christianity. Nicholas reportedly gave away all his inherited wealth while he was alive and would travel far and wide to give to the poor and help the sick. A feast is celebrated in his honor across the globe on the day of his death (December 6) linking him to the time of year people celebrate other winter holidays, typically in relation to the winter solstice. The name Santa Claus is derived from the Dutch “Sinter Klaas.” And the Dutch, who often celebrated his feast every year, brought his legacy to the United States in the 1700s.

In 1822, Clement Clarke Moore wrote a long Christmas poem called “An Account of a Visit from St. Nicholas,” which we now know as “The Night Before Christmas.” In this poem, Moore describes how old Saint Nicholas wears a red suit, slides down chimneys, and delivers presents on a sleigh pulled by reindeer. Over the years, others have added elements to this story and have used it to market merchandise at the end of the year, as well as promote the gift-giving spirit. Christkind or Kris Kringle delivers presents to well-behaved Swiss and German children. In Scandinavia, a jolly elf named Jultomten delivers gifts from a sleigh pulled by goats. And in England, Father Christmas visits each home on Christmas Eve to fill children’s stockings with holiday treats, while Pere Noel is responsible for filling the shoes of French children. Other countries colonized by Europeans have also adopted some version of this story over the years.

What’s fascinating about the story of Santa Claus (or whatever you call him in your home country) is that it all started with one generous man who lived hundreds of years ago and traveled around to give gifts and offer hope to others. And over the years, it was embellished by the human imagination.

The tradition of gift-giving itself has its origins in the Christian gospels, which tell of "wise men from the East" bearing gifts for the Christ child.

Befana the Witch and the Feast of the Epiphany

The Feast of the Epiphany is celebrated widely across Europe, and usually revels in the time-period when the three wise men realized that Jesus was born to bring peace on Earth. It also centers around the time of year when winter solstice celebrations took place in ancient and pagan cultures, when large feasts were enjoyed after harvesting season before winter started in full force and crops were temporarily unavailable.

In Italy, legend has it that during this time of celebration, the three wise men had knocked on an elderly woman’s door to ask for directions to Jesus’s manger, so they could bring him offerings. Her name was Befana. She was kind and sheltered the wise men, but didn’t know how to get to Jesus. They asked her to come along with them when they set off to find the manger, but she declined at first. Once they left her home, however, she changed her mind and wanted to offer Jesus a gift. But due to snow covering their tracks, she couldn’t find the wise men. So, to this day, she goes around leaving gifts for every child in Italy, just in case one of them is the baby Jesus. This is how children receive their gifts every year.

Not all holiday gift-giving traditions and stories come from a generous saint or hospitable elderly woman. In Iceland, Jólakötturinn (or Yule Cat) is a giant scary feline that’s the pet of other Christmas monsters that eat people. The Yule Cat stalks the snowy countryside on Christmas Eve and devours those who didn't receive new clothing to wear for the holiday. This story has been around so long, historians aren’t sure how it originated. But it’s often said that the story of the Yule Cat inspired seamstresses and farmers to work harder so that they would be able to give and get clothes during the holiday season. It was a story that inspired gift giving and hard work during cold and dark winter months.

Another horrifying story that explained gift-giving was the story of the Christmas witch, Perchta, in Bavaria. She was originally a goddess in the pagan pantheon of the upper German region of the Alps. She embodied fate as well as the souls of the dead, and had ties to several Norse goddesses such as Frigga and Freya. Over time, with the help of Jacob Grimm (the famous writer of children’s fairy tales), Perchta (whom Grimm called Frau Berchta) became a figure that would wander from home to home during the early winter months. And since she theoretically embodies fate, she always knows who’s a hard worker (or who’s on the “nice list”), and she seals the fates of those she encounters as she wanders around. For those who are good and hardworking, she leaves a silver coin. For those who aren’t good and hardworking, she splits open their bellies, removes their intestines and replaces them with pebbles and straw. She’s often characterized as having two faces and bodies—the white-robed beautiful witch who appears to the hardworking people, and the monster with implements to remove organs and appears to people who are lazy.

The origins of holiday stories regarding gift giving are fascinating to uncover. They seem to all have origins centering around regions, religion (whether pagan or other deities), and winter solstice festivals and feasts.

What’s your favorite winter holiday story? Share with us in comments below.

From all of us at ProofreadNOW, no matter how you celebrate this time of year, we wish you and your families the happiest of holiday seasons!