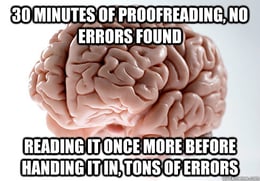 In summary: Use percent with a number and percentage with no number. For example:

We don’t know of any style guides that prescribe using numerals with percentage. So don’t write anything like this:

You’d either need to add “percent” at the end of the sentence or rewrite it to avoid using “percentage/percent” in the same sentence. But sometimes, using both in a sentence is unavoidable, as in this example:

The easy way to remember which term to use is this: If you’re just subtracting one percentage from another, use percentage points to talk about the difference.

Also, we’re sorry for lots of math in a grammar blog. Atrocious, we know, but it really does add up.

There are three simple rules to guide you when deciding when to spell out numbers before percentages or use numerals:

Writing Percent or the % Symbol

Remember that the % symbol can stand for either “percent” or “percentage.”

If you’re not writing technical content, the word “percent” is generally used; in scientific and statistical copy, the % symbol is more common.

The only time you need to hyphenate a percent is in number ranges. Otherwise, leave compounds open, as in:

Different strokes for different folks…and style guides. Since other people have different takes, here’s a quick overview of some popular style guide approaches:

This post is an updated version of 3 Rules for Using Percentages by ProofreadNOW.com’s Terri Porter.