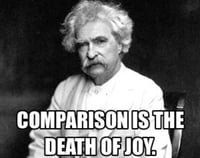 Than, as and like can all function as conjunctions or prepositions (as and like can wear other hats as well, which we’ll discuss in a future post). But the use of than as a preposition and like as a conjunction raises the hackles of grammar purists. Although they acknowledge these uses are widespread in casual English, they adamantly advocate against them in more formal contexts. Others say such uses are acceptable and point to the dictionary as support.

What to do? Ideally, you’ll have a better idea after reading our next two posts. We’ll talk about pronouns with than this week and address their use with like and as next week.

Recall that prepositions are position words that connect nouns and noun phrases. Conjunctions join verbs and clauses. Why does this matter? Because it helps you figure out which pronoun to use after than.

In other words, whether the pronoun in a clause after than should be in the nominative (“I”) or objective (“me”) case is determined by than’s function (i.e., preposition or conjunction), as well as the meaning of the sentence. (See last week’s post for a review of pronoun basics, including the forms pronouns take in the nominative versus objective case.)

Than as a Conjunction

Viewing than as a conjunction, the correct pronoun would be “I.” What’s tricky here is that a key part of the second clause is merely implied. Omitting the last part of the sentence can obscure the sentence’s meaning and muddle the issue of which pronoun to use. Writing out the full comparison makes picking the correct pronoun considerably easier:

Than as a Preposition

If, on the other hand, you view than in the above example as a preposition, “me” would be the correct answer regardless of the meaning. (As noted in last week’s post, pronouns used as the object of a preposition must be in the objective case.) That obviously could be a problem if it means the sentence could be interpreted in multiple ways.

Which Approach Should You Take?

If you align with traditional grammarians, you may wish to always treat than as a conjunction and use the nominative or objective case accordingly. Certainly, doing so would be appropriate in more formal writing.

Because the prepositional use of than has become so common, however, following it with a nominative pronoun standing alone (e.g., He is shorter than I) can sound formal and pedantic, which is fine if that’s your goal. But if you’re wanting a more informal tone, consider one of these approaches:

If you think the issue of than as a conjunction or preposition is contentious, try pushing for like as a conjunction with grammar purists. As we said above (or is it “Like we said”?), we’ll take that up in our next post.