We Have Met the Enemy, and It Is Pronouns

Being an editor means never having time off. If only we could flip a switch to turn off whatever mechanism it is that forces us to notice spelling and grammatical errors everywhere. Sure, sometimes it’s a source of amusement, like this sign I saw while eating breakfast across the street from that establishment, but much of the time it’s downright painful. 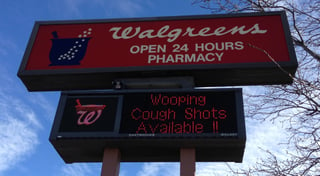 At or near the top of the list of torturous transgressions is the misuse of pronouns. Because some of the problem stems from a lack of understanding about the different cases pronouns take and why, a review of pronoun basics might be helpful.

Most people know to use I as the subject of a sentence and me as the object:

But pronoun trouble most often arises in three instances:

1. with compound subjects or objects
2. with comparatives
3. with possessives

This post addresses the first topic. We’ll take on the use of pronouns with comparatives such as than and like in the next two weeks and save our discussion of possessive pronouns for a future post to avoid inflicting pronoun fatigue (a serious condition marked by glazed eyes, mental confusion and, occasionally, nervous breakdown).

How to know whether to use I or me in compound constructions has been widely addressed. The usual guidance is this: In a compound subject using I or me, drop the other subject and use whichever pronoun sounds correct standing alone. For example:

Bubba and [I/me] need to shore up the creek edge of our property with sandbags.

If we take Bubba out of the picture, the job gets harder because I (not me) now need to move the sandbags alone.

Easy, right? Wait … we’re just getting warmed up. What about a sentence like this:

It’s you and [me/I] against the world.

Actually, it is the subject, and is (hidden in the contraction it’s) is the verb. What’s tricky here is that it is what’s known as a false subject or expletive — a word or phrase such as it or there is at the beginning of a clause that has no special meaning but stands in for a delayed subject. Because it can wreak bleeping havoc, expletive seems to fit rather well.

The other tricky part of the example above is the linking verb is. A linking verb doesn’t show action but expresses a state of being or connects the subject (it) with information about the subject, such as a condition or relationship. Imagining linking verbs as equal signs can be helpful. In the above example, reframe It’s you and me as It = you and me.

In other words, you and me is not the object but the compound subject of the sentence, so the proper construction is you and I (sorry, Helen Reddy). Likewise, the nominative case in the following sentences is technically correct:

Though grammatically correct, these constructions can sound too stuffy in informal situations. So saying “It’s me” in response to the query from the other side of the door is probably preferable in this situation (unless, of course, you’re knocking on a stranger’s door).

We typically encourage eliminating false subjects altogether, which also gets rid of the pronoun problem:

They decided that building an ark would be too much work.

But sometimes such constructions can be effective for emphasis, so knowing how to handle the pronouns is useful.

Another tricky area is compound plural subjects. Can we use the guidance given above for figuring out whether to use the nominative or objective case of plural subjects? Consider the following example:

Bubba and [we/us] need to shore up the creek edge of our property with sandbags.

Based on the foregoing, Bubba and we is technically correct. But it sounds odd, doesn’t it? The easiest solution is to recast the sentence:

With Bubba’s help, we need to shore up …

The continual admonitions kids get when they’re in school about using I rather than me in compound-subject constructions seemingly have led many to believe that using I (or some variation that doesn’t include me) in every instance is correct. This kind of hypercorrection is how we end up with phrases such as:

Bubba and I are the objects, so the objective case is called for. Once again removing Bubba from the equation, we’d say, “The client requested a meeting with me,” making Bubba and me in the above examples correct.

Myself, used in the second example, is a reflexive pronoun, which is used only to show that the action in a sentence happens to the subject doing the action. Because the client is the subject, myself doesn’t work. Alternatively, saying “I requested a meeting with Bubba and myself” is redundant, and “I requested a meeting with myself,” though grammatically correct, is just silly.

A lesser-known rule about pronouns as objects is that when they’re the object of a preposition, they have to be in the objective case. Recall that prepositions are words used with nouns or pronouns to show direction, location or time or to introduce an object (e.g., above, at, before, between, down, from, over, under). Common violations of this rule include:

As is often the case, context is key. You’ll want to use the correct pronouns in formal, business or academic writing, presentations, speeches and so on, but you can relax a little more in casual conversation or when you want to avoid sounding pedantic — unless, of course, you’re socializing with a bunch of editors.