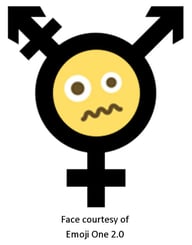 And because ADS members include linguists, lexicographers, etymologists, grammarians, historians, researchers, writers, editors, students and independent scholars, you might be thinking their choice is the beginning of the end of the English language as we know it.

Relax. Let’s look at the facts.

Alternatives to he and she have been proposed along the way, but none have stuck. Most would agree that using he to encompass everyone is sexist and that using she for the same purpose is self-conscious. And using he or she or variations thereof (he/she, s/he) can become awkward, or even ridiculous, in a sentence that uses multiple personal pronouns:

The teacher required each student to write his or her name at the top of his or her paper before submitting it.

We can easily avoid the problem here by rewriting the sentence:

The teacher required all students to write their names at the top of their papers before submitting them.

But that’s not always the case.

ADS acknowledged that, in conducting the vote, its members “do not pretend to be officially inducting words into the English language. Instead, they are highlighting that language change is normal, ongoing and entertaining.” Even if you don’t like it.

The fact that singular they, which has been around a long time, has just been named Word of the Year is more reflective of its newer, and intentional, usage to refer to someone whose gender identity is nonbinary. Caitlyn Jenner made gender identity a hot topic in 2015, which brought about discussions of how to refer to individuals who identify themselves outside the traditional male/female model.

If you’re writing a formal document and want to follow traditional English conventions (which is probably wise), he or she is certainly appropriate (although a better approach would be to use plural subjects or rewrite the sentence if possible to avoid such awkward constructions).

In speaking or more informal writing, singular they is acceptable if you don’t know the person’s gender … and sometimes even if you do (especially in speaking).

But if you’re writing about someone who identifies as something other than male or female, singular they is unequivocally the best choice — at least for now.