The Oxford Comma: Use It or Ditch It?

Should using the Oxford comma (also known as the “serial comma”) be a requirement? This is one of the most heated debates in the realm of grammar today. This debate exists not just among writers, but large institutions too. There's even a Twitter account dedicated to asking celebrities about their choice to use (or not use) the Oxford Comma, @CelebrityOxford. Margaret Atwood, the noted author and literary critic, recently disclosed her thoughts on the topic there. 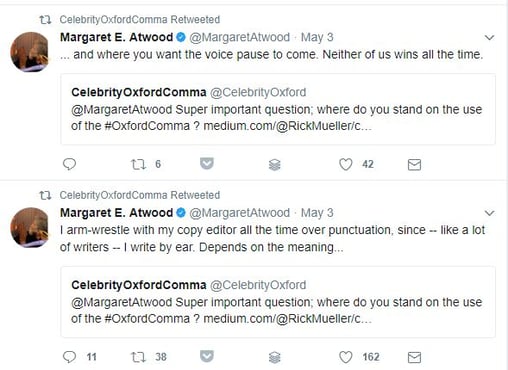 So, what exactly is this contentious punctuation?

The Oxford comma is the last comma in a series of items in a list before a conjunction, usually “and” and sometimes “or.”

Please bring me my jacket, snow boots, and gloves.

I would like to look at modern art, go kayaking, or spend time with my family.

A couple of years ago, researcher Jasso Lamberg discovered that the Oxford English Dictionary notates P. Sutcliffe as the first writer to use the phrase “Oxford comma” in 1978. However, Sutcliffe explains in his books that the phrase was first mentioned in grammar rule books written by F. Howard Collins over one hundred years ago. And Collins admitted that he got the idea to codify the rules surrounding the Oxford comma from letters Herbert Spencer wrote to him. Herbert Spencer was a jack-of-all-trades contemporary of Charles Darwin, and was also the person who truly came up with the phrase, “survival of the fittest.”

Arguments for Using the Oxford Comma

Oxford University Press and the Chicago Manual of Style adhere to using the Oxford comma, as do many researchers, writers in academia, and a variety of other reputable publications. Why do they use it? Many supporters of the Oxford comma claim to use it because it offers efficiency and clarity, alleviates confusion, and makes reading things easier.

With the Oxford comma: I would like to make apple, raspberry and blueberry, and peach pies for the festival.

Without the Oxford comma: I would like to make apple, raspberry and blueberry and peach pies for the festival.

Arguments Against Using the Oxford Comma

The AP Stylebook considers the Oxford Comma unimportant, and many journalists agree that they shouldn’t be required to use it. Why don’t they use it? Many opponents of the Oxford comma claim that it makes a piece of writing sound more pretentious and stuffy, and that it can make things seem cluttered and redundant. Many magazine publishers renounce its use as well, because sentences loaded with commas take up valuable page space. Many also think that if adequate conjunctions are used in sentences, there really isn’t a need for a comma.

With the Oxford comma: Bob claimed he went to church, the market, and then home.

Without the Oxford comma: Bob claimed he went to church, the market and then home.

Does it really make a difference if the Oxford comma is included in this sentence? Does it change its meaning at all? Probably not. But does that mean we should refrain from using the Oxford comma altogether?

According to this helpful TEDEd video, common wisdom states the Oxford comma should be used if it helps the writer and reader avoid confusion. And the writer should also be consistent with their usage of Oxford commas throughout a piece of writing. They ought not simply use it on a strictly discretionary basis. Others think that it depends on what you're writing. If you’re writing an in-depth research paper, it might be more appropriate to use the Oxford comma. But if you’re writing a short article on types of glue, you can probably refrain from using it.

If you’re against using the Oxford comma, you might want to first consider a recent lawsuit in which the verdict hinged on a problematic piece of punctuation. Around $10 million of unpaid overtime was awarded to drivers of Oakhurst Dairy earlier this year because an Oxford comma wasn’t used in a document outlining activities exempt from receiving overtime pay.

Meat and fish product; and

Notice that the Oxford comma is missing after “shipment.” Because the comma was missing, the judge ruled that it wasn’t clear that distribution-related activities were also exempt.

Truth be told, whether you love or despise the Oxford comma, and whether you use it or not, probably depends on who taught you how to use punctuation. If Sister Mary always made you use the serial comma in grammar school, then you probably still do to this day, even if you don’t notice. If, however, your first editor had a meltdown every time you used the Oxford comma, then you probably avoid it like the plague.

Do you use the Oxford comma? Why or why not? Let us know in the comments below.