The Return from Neverland 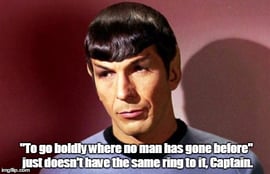 Some find a certain comfort in such absolutes because correcting the problem is generally easy — they see one of these errors, and they fix it. But rigidity can be stifling, especially when the reasoning behind it is “because that’s the way we’ve always done it.”

Does that mean writers can just make up their own rules as they go along? Of course not. But questioning the basis for rules serves two purposes: (1) It increases understanding of the rules and their application, and (2) it allows for evolution of the language.

The fact is, some of what once were hard-and-fast grammar rules no longer apply in modern English. But having been drummed into our heads from an early age, they’re hard to shake. Many of the rules that start with “Never” fall into this category. We list below what we consider the top three myths, along with some thoughts on contemporary usage, culled from various authorities.

Never start a sentence with a conjunction.

See the red words in the paragraphs above? Oops. I missed the memo. Oh, wait … there was no memo. Apparently, some English teachers along the way thought that conjunctions such as and, but and or should remain in their subservient role as joiners, not stand out front as leaders. In other words, it’s a stylistic preference, not a grammatical one.

How it became so entrenched is remarkable, especially in light of commentary nearly 80 years ago criticizing the practice: “As in the case of the superstition about the preposition ending, no textbook supports [the myth about starting a sentence with a conjunction], but apparently about half of our teachers of English go out of their way to handicap their pupils by inculcating it.” (C.A. Lloyd, We Who Speak English, 19 (1938)).

Never end a sentence with a preposition.

This rule may be a literal interpretation of preposition, from the Latin “to put in front,” meaning that a preposition can’t be the last element in a sentence. It could also be based on Latin grammar rules, in which prepositions usually precede their objects. Whatever its origin, a fellow named Robert Lowth penned the rule in his 18th-century grammar book, and the rest is history. But it makes about as much sense as the preceding one (see quote above).

Sometimes, of course, you’ll want to omit the ending preposition, as when it’s extraneous:

Where are you going to?

The point is not to make your sentences stilted and unreadable by doggedly rearranging them until no ending prepositions remain.

An infinitive is the basic form of a verb, often used with to (to write, to drive, to balk). A split infinitive refers to constructions in which one or more words come between to and the verb:

He had to quickly write the article to meet the deadline.

In this example, you could just as easily move quickly to follow article without changing the sentence’s meaning or impact. But that’s not always the case. Consider this example:

You have to really watch him.

You really have to watch him.

The first sentence means “you have to watch him closely,” which isn’t quite the same as “it’s important that you watch him,” which the second sentence conveys. In the end, there’s no good reason for changing it. As Oxford Dictionaries notes, people “have been splitting infinitives for centuries.”

The absoluteness of these rules is what makes them myths. In other words, never say never — you may want to apply these rules in certain situations. As we often recommend, let context and your audience guide you.

What other “nevers” do you have a hard time letting go of? Let us know in the comments below.