What Is Gender Bias in Writing?

Avoiding gender-bias writing isn’t about being politically correct. It’s about actively ensuring you’re not alienating or ignoring an entire gender in your writing when you’re speaking to an audience that will most likely consist of both genders (i.e., people in the workplace, readers of a text book, and readers of marketing and advertising materials).

In the past, English speakers and writers were usually instructed to use masculine nouns and pronouns (e.g., “man,” “he,” “his”) in situations where the gender of their subject(s) was unclear or inconstant, or when a group to which they were referring contained members of both sexes. However, most English language readers no longer recognize the word "man" as being synonymous with "people." And instead of terms like “mankind,” “humankind” is used.

Here are some alternative options to using “man,” “he,” or “his” when referring to people in a situation where gender is unclear or inconstant. Keep in mind that each option may not be relevant or grammatically correct to use in every situation.

Alternate Between “he” and “she”

Original: Ask the customer whether he is happy with his new product. If he is, ask him more about it.

Alternative Option: Ask the customer whether he is happy with his new product. If she is, ask her more about it.

Replace the Pronoun with an Article

Original: Ask the employee to submit her report.

Alternative Option: Ask the employee to submit a report.

Original: Ask the speaker whether he is ready to give a speech.

Alternative Option: Ask whether the speaker is ready to give a speech.

Use a Plural Antecedent for the Pronoun

Original: Ask the teacher if he is prepared to give a lesson.

Alternative Option: Ask the teachers if they are prepared to give a lesson.

Switch the Gendered Pronoun with Who

Original: A new employee will be better prepared if she receives adequate training.

Alternative Option: A new employee who receives adequate training will be better prepared.

Write in the Imperative Mood

Original: A new employee must be ready to work on his first day on the job.

Alternative Option: Be ready to work on your first day on the job.

If you want to avoid gender bias in your writing, know your audience first. If it’s unclear whether they’ll be all male or all female, then use some of the alternative options listed above, as well as gender-neutral terms.

It’s important to avoid gender bias in your writing because you always want to speak directly to your audience, especially in the workplace and when writing marketing materials and advertisements. It’s imperative to speak to your audience and not leave some of its members out, especially if you are working with assumptions and subconscious beliefs (e.g., only men work in the sciences, and only women buy clothing for children) and not hard data and research about members of your audience. Communications are becoming more and more gender-neutral in today’s world, so it’s vital to keep your writing bias free if you want your writing to be as effective as possible with an audience.

What are your thoughts on gender bias in writing? Please share in the comments below. 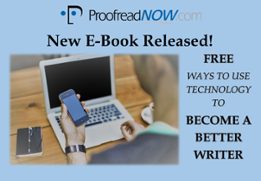