Editor or Proofreader:  Who Does What? 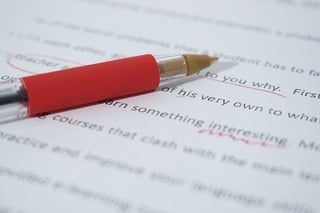 Experts generally agree that the difference between an editor and a proofreader is as follows:  an editor reviews a piece of writing to fix any errors in its structure or content, followed by a review by a proofreader who looks for any glaring grammar or spelling mistakes.

While there is some truth to this general claim, there is a little bit more behind what makes editors’ and proofreaders’ roles different and why they’re often jumbled. Otherwise, so many people wouldn’t be confused about who does what in the first place.

Here are the differences between the responsibilities of editors and proofreaders, explained a little more in depth.

What an Editor Does

There are many types of editors who work on many types of publications. This is probably where confusion about the two roles came to be. Some editors get into the nitty gritty of perfecting a piece of writing (checking for grammar and spelling errors, as well as concerns of style), while others focus only on concerns of the overall structure and flow of a piece of writing. Here are two of the more common types of editors out there and what they do.

An editor verifies that the content of a written draft stays on topic and flows well. For instance, he (it could just as easily be she, but we’ll dispense with the constant ‘he or she’ here) will note if the writer is talking about a unicorn in one paragraph and then a leprechaun in the next paragraph for no apparent reason. He will also notice if the writer is disclosing the history of unicorns in one paragraph and then in the next paragraph jumps to what unicorns like and dislike, without making a proper transition. In that scenario, the role of the editor is to ensure readers aren't lost in their journey of learning about unicorns. The editor is also most likely a content expert on the topic of unicorns.

While some editors might correct obvious grammatical and spelling errors, their main objective is to verify the overall structure and flow of a piece of writing. Editors will also rewrite some sections of the text where it’s needed, to make sure the writing is clear and in concert with the tone and style of the rest of the draft.

Here are some things he’ll mention to the writer:

Now, here’s where it starts to get a bit more confusing. A copyeditor does check for grammar, punctuation, and spelling errors (like a proofreader does), but she will also mention:

A copyeditor typically receives a later draft of a piece of writing before it goes to a proofreader, and will rewrite small parts of a draft if it’s needed.

What a Proofreader Does

The somewhat blurry line between what editors and proofreaders do can be difficult to specify if you aren’t yet aware of how their responsibilities differ. They’re just people who review your written work to make sure it’s the best it can be, right? The answer is: yes, absolutely. However, it’s important to clarify and understand their differences so writers don’t expect one type of service and receive another, and so editors and proofreaders aren’t unintentionally leaving their clients unsatisfied or confused.