When to Capitalize North, South, East, and West

Credit for the original, and extremely popular, blog post, North, East, South or West - Capitalize or Not?, goes to ProofreadNOW.com President Phil Jamieson. 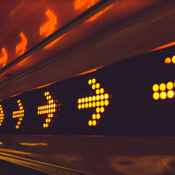 The other day, I got lost in the jungle, but luckily, I had a compass with me …

So I was able to draw perfect circles with a pencil.1

Do you feel this way? You have the raw materials (a knowledge of compass directions, the ability to point toward the sun and grunt “east”) but you don’t know “where to go” with them.

If you cringe every time you write a compass direction or a related term, you’ve found the perfect resource.

While there are some distinctions between style guides,2 this post serves as an overview of the most important, well-accepted, and concise d

irections on the subject as it applies to business writing.

1. Lowercase compass directions when they are being used to indicate direction or general location.

2. Capitalize compass directions and their derivations when they’re part of a proper noun and/or refer to definite regions or geographic areas.

3. Capitalize compass direction derivations when they refer to the people in a region or their political, social, or cultural activities.

4. Lowercase compass direction derivations when they refer to the geography or climate of a region or general location within a region.

5. Points of Clarification: We recognize there are differing opinions on the importance and relative significance of a region, especially for people who call an area their home versus those who don’t. For example: Residents of southern California often prefer to write Southern California.

Exceptions based on specific regional, political, or historical context are inevitable, and an author’s preference should usually be respected.

For any terms that aren’t included or for which an appropriate analogy can’t be made, consult Merriam Webster or an encyclopedia. If the term in question is otherwise generic and not listed as capitalized, rest on your laurels and use lowercase.3

Thanks for reading the GrammarPhile! We want our content to be as helpful and relevant to our readers as possible. Please complete the quick survey below.

2 On variations between AP and The Chicago Manual of Style regarding compass direction capitalization, read Terri Porter’s post North, South, West, East … Capitalizing Can Be a Beast.

3 This general advice summarized from The Chicago Manual of Style, 17th edition, sections 8.46 and 8.47.