The public has spoken, and native Canadian Maureen McLeod is our winner!

(We became aware that the formerly published tagline, though not intended for use in any capacity beside this contest, is coincidentally in use in a very similar form by another company. Out of respect, we’ve preemptively removed the winning tagline from this blog post.)

Maureen writes limericks for fun. Her friends tell her she could be a Jeopardy star, but she slams the competition from the comfort of her home. When her children were four and eleven years old, she and her husband sold their house and vehicles, packed their belongings into a second-hand camper, and traveled around the United States for 10 months. Just for fun. “He was adventurous,” she says.

In short, Maureen is “good people.”

It should come as no surprise then, that she won our Tagline Contest. Her liveliness is paired fairly with a delightful sense of humor. More specifically to the point, she has been wielding the English language with aplomb and precision for decades.

She grew up in a small community in Northern Alberta. “A tiny, hamlet town,” she says. Her father was the school principal, and despite the fact that there was no library, he always found ways to get them books. Those stories opened up her world and set her on a path to her love of knowledge and the English language.

One of the stops on her family’s return from the seat-of-their pants, 10-month-long road trip was Prince Edward Island, apt considering the Anne of Green Gables series is one of Maureen’s favorites. The Anne books, along with others like Little Women, showed young Maureen a realm of possibility in a time (the 1940s and 50s) when women were mostly relegated to home life. “Women didn’t do much; they weren’t expected to do much. They [the book heroines] showed me I could do things too,” Maureen recalls. And boy, did she ever.

Teacher, corporate writer, administrator, and freelance writer—these are a few of the professional coats she’s worn (it’s cold in Canada). Mother to two daughters who, by her admission, “are amazing women in their rights,” she marvels at the resiliency of her younger daughter; “she exudes happiness,” and Maureen is amazed by the instinct and skill her older daughter demonstrates in her work with young children; “she makes them feel important.”

Her degree in English gave her a respect for the value of prescriptive grammar, something she noted her daughters’ curriculum lacked when they were school-age. So she taught them the ins and outs herself. To this day, they enlist her help with the minute graces of the venerable comma.

Maureen’s been a ProofreadNOW.com newsletter subscriber for the past 12 years. As a trivia buff, she thoroughly enjoyed the quizzes created by PRN President Phil Jamieson (not-so-subtle hint: Phil, do more of these!). In fact, she even submitted a correction on one quiz answer, for which she received a T-shirt and limitless bragging rights (the first award she reported, the second perk is my poetic license).

On the subject of poetry, Maureen published haikus in the Japan Times, an English newspaper in Tokyo. After she experienced a job loss while nearing retirement age, her husband, true to his adventurous nature, suggested they relocate to Japan. They stayed for 10 years. Teaching English there, writing articles for an English language magazine for expats, and practicing the art of succinct but powerful expression through poetry are three probable reasons taglines come easy to her. That and her brilliant mind for fast facts.

In fact, when pressed for a tagline to describe herself, she came up with two, on the fly:

The former is something I suppose any sane, attractive, and well-educated woman should aspire to. The second is a repeated phrase of hers among friends and family, all of whom, I’m sure, value her wit and wisdom, as well as her memorable intellect.

As if there need be further proof of her virtues, see her favorite grammar-related joke, complete with bilingual charm, in the meme below.

Suffice it to say, Maureen, your $50 prize is well-deserved, and we’re grateful for the pleasure of featuring you as a stand-out grammarian and language enthusiast.

Thank you to everybody who participated in our Tagline Contest! Stay tuned for more fun quizzes, ridiculous blog posts, and ways to be part of the PRN community of self-proclaimed grammar nerds.

If you aren’t a newsletter subscriber, you’ve made a mistake! Fix it here. 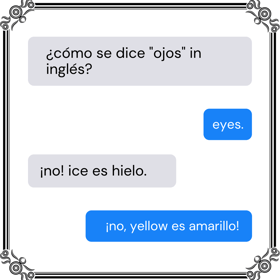